In Defense of Caillou

These days, there is so much controversy on the internet. While I swore that I would not contribute to the nonsense, I just can’t hold it back any longer. I’ve been holding this in for a long time, and I know you will probably have some pretty strong opinions about this, but I feel that I’m overdue in my confession.

Parents disagree an many things; thanks to those moms’ groups on Facebook, it’s clear that there are no shortages when it comes to differences in opinion. One thing that I’ve found that most everyone agrees on, though, is their undying hatred of the whiny cartoon character, Caillou. I completely understand why parents don’t like him; as cartoons go, his is quite annoying. But that animated preschooler has bought me too many much-needed breaks from parenting that I otherwise would not have had, so I feel I must defend him.

Before judging me as an unfit mother, allow me to explain. My oldest son has Down syndrome, and very much enjoys routines. When he was younger, he became quite attached to Caillou, and after seeing how long he sat and quietly enjoyed the show, I eagerly agreed to let him watch it. It was well worth listening to the 20 minutes of obnoxious Caillou lessons each day to be able to catch up on tasks around the house…or even just sit and zone out while my kid happily indulged in his favorite show.

Even now, at almost 13 years old, my son will occasionally veg out with Caillou. It’s a comforting, familiar groove, and I’m not about to argue with him about it. Is the show still annoying? Absolutely! And, not only is the sound of his voice just as irritating, but it’s also very difficult to find an outlet on which to watch Caillou (all you haters have done a good job in making him scarce!). But, I still need those breaks from special needs parenting that sometimes only a petulant, fictitious kid can provide, so I will always feel the need to defend his existence.

So, there you have it, my darkest secret. I am thankful for Caillou. This parenting gig can be so weird. 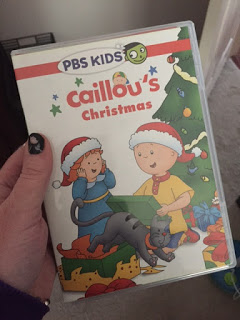 This represents 60 minutes of peace and quiet…