Advocacy Doesn’t Get a Holiday

When
one of your children has disabilities, holidays may not always resemble the
traditional celebrations that others enjoy. Independence Day, with all its
patriotic fanfare, can be an absolute nightmare for a child with sensory
sensitivities (and also for their families).
For
several years, my family has not attended community fireworks displays because
the crowds and sounds have just been too much for my son. We have also spent
time apart on the holiday so that I could take the younger kids to the parade.
This year, we decided to try to spend the holiday together. We decided to watch
a local fireworks display at an off-site location, one that was just far away
enough to see everything but with a fraction of the noise. We also took a big
leap of faith and attended a parade as a family. This was an even bigger deal,
because my son tends to associate parades with sirens (as the police cars and
fire trucks participate in the parade, and those sirens are just too much for
him), but we figured we should give it a try this year. Although he struggled
at the beginning of both of these events, he was eventually able to relax and
enjoy them, and now even uses words like “awesome” and “best
ever” to describe them. That is a major milestone for us!
While
we found a way to celebrate the holiday this year, we are still dealing with
sensory issues in our own home. Neighbors who choose to terrorize the most
vulnerable residents of our community with their illegal fireworks, in order to
satisfy their pyromaniac tendencies, make a challenging holiday exponentially
worse for families like mine. Last week, after many rounds of pro-firework vs anti-firework
posts on our neighborhood Facebook page, it was suggested that we confront
neighbors who choose to ignore the laws regarding fireworks, rather than
posting passive aggressive complaints online. Last night, I found myself in
that situation. I was angry because my kid (and dog!) were terrified, and I
decided to address it directly rather than post in the Facebook group and
inevitably cause another battle. When
I approached a group of neighbors to inquire how much longer their obnoxious
antics (which took place one block from my house, sounded way louder than the
community display we watched, and caused mass hysteria) would last, I was
verbally attacked. They belligerently told me to “relax, it’s the 4th of
July,” and “it’s my right as a Vet to celebrate my freedom.”
When I explained that my son also has rights, the gentleman who described
himself as a Vet called me an a**hole. There was absolutely no compassion, no
apology, and no respect.
I
was shocked and upset. I wasn’t trying to kill their fun; I was requesting that
they observe the laws regarding fireworks. They could have celebrated at one of
many fireworks displays around town. Their good time should not have superseded
common courtesies. My responsibility is to my kids; if I can advocate for my
son and raise awareness of a situation (as I know that others in our
neighborhood are also struggling with the noisy amateur fireworks), then I will
absolutely do it. No one deserves to feel unsafe in their own homes, and yes,
that includes people with disabilities.
Now
more than ever, we need to be civil to one another. Acting in kindness would be
ideal, but if that is too difficult, I implore you to at least be respectful.
When you are stubbornly insisting that you have a right to engage in illegal behavior
that is scaring children with disabilities, there is a major problem. If
pointing that out to you makes me an “a**hole,” then fine, yeah: I’m
an a**hole. It’s probably not the first time I’ve been called a name because
I’ve stood up for my kid, and it probably won’t be the last time, either. 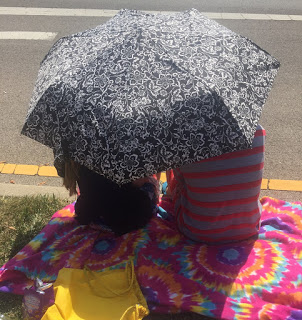 Waiting for the July 4th parade to begin