Pizza Is Our Friend

Sometimes, I have a momentary lack of judgement as a mother. Today brought one of those times.

Because Andrew needed picked up from day camp at 4pm, I thought it would be the perfect opportunity to go shopping for Father’s Day gifts, since we would already be out.

When everyone was tired after a looooooong week.

So, yeah, lack of judgement. But, the kids did want to select treasures to present to their dad on Sunday, so we had to carry on with our mission. After sitting through relentless traffic, we made it to Target, and I discovered that Alex had fallen asleep. Major dilemma! I knew he would be a wreck after waking up, making our cranky shopping trip even worse, but it took us about 35 minutes to go five miles, and I wasn’t about to commit to trying again on Saturday.

We waited about 10 minutes, until Alex groggily agreed to walk into Target, but we weren’t four steps into the store before the kids wreaking havoc. Hanging right by the door was a large collection of Cavs t-shirts, which immediately caught Andrew’s eye. He wanted to give Mark a playoff t-shirt (I talked him out of that one; can you really expect a jilted fan to wear a playoff tee when their team lost??), and then a kids’ t-shirt (again, talked him out of it), all while Alex stealthily moved away from us, hunting for the Hot Wheels. And, as per typical Kearns Target Protocol, Andrew announced loudly that he needed to pee, causing the boys to race to the bathroom.

After bladders were voided, we started our gift hunt once again. Alex, still desperately wanting to find the Hot Wheels (for himself, mind you, not as part of his dad’s gift), planted himself in the middle of an aisle while the younger kids debated on another gift idea. There he sat, in all his angry criss-cross-applesauce glory, while other shoppers pretended to not watch the Kearns Family Circus. Eventually, he was back on his feet and we continued on with our shopping.

Once we finished at Target, we got back into the annoying traffic, and headed toward the grocery store. We were all even more hot and grumpy, and I knew the quick stop at Kroger was going to be a nightmare.

The kids did not disappoint.

They fought over which cart to choose, who would push the cart, what we were buying, through which line we would check out. Alex attempted to run down at least three other shoppers with our cart (and please, for the love of everything pure and good, if he ever tries to do this to you, do NOT smile and say “It’s ok!” while I am reprimanding him…but that’s another blog for another time).

We stumbled back out into the parking lot, loaded up our groceries, and Alex reminded me for the 432nd time that I had promised him a pizza for dinner. Fortunately for him, I was in no mood to cook AND I had a coupon AND I could pick up the pizza to save the delivery charge and tip. I ordered online and decided that I would stop and pick up a little treat for my own dinner while we waited for Al’s pizza. We finally reached our fourth and final stop (hallelujah!): the pizza joint. I pulled out my phone and checked to make sure we weren’t too early, although it had been at least 15 minutes which was plenty of time to make a plain cheese pizza. Right? 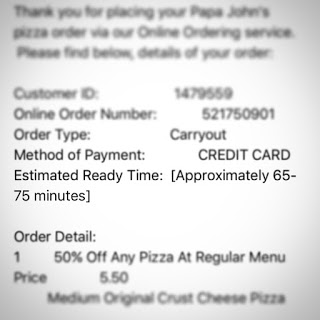 Wrong!! Why on earth did they need 65-75 minutes to prepare my takeout order? I had no idea, but I was determined to find out.

I marched the kids inside and pointed at a bench; they must have sensed my exasperation because they all sat down (in birth order,  no less!), wide eyed and ready to watch their mom handle the situation.

I began my sob story to the young woman behind the counter: “I ordered 15 minutes ago,” “we’ve sat in traffic all evening,” “my kid has a disability and I promised him this pizza.” I quickly realized that I had draped myself over the counter, arms splayed out as I leaned in (probably looking crazed and scary!), but I went one further: “You’re gonna need to help me out here. I either need a refund, or a pizza, like right now!” I wasn’t rude, as it wasn’t this person’s fault, but it was obvious that I was agitated.

The young woman looked at me with a rather incredulous gaze, quietly asked for my name, and then said “You’re pizza is ready!” I stood up straight, smoothed out my shirt, lifted my chin, and signed the receipt. I then herded the kids back to the car and we once again slid into our place in traffic and eventually made it home.

I could blame the erroneous confirmation email on a wonky automated system, but no. You know why that pizza was ready after 15 minutes and not 65? BECAUSE PIZZA IS OUR FRIEND AND WILL NEVER LET US DOWN. I just know it.

I also know that I really, really need a vacation. Or, at the very least, a day without being imprisoned in my car with all three kids, stuck in traffic.

After spending a lovely morning at church, and enjoying a nice lunch out with the family, I decided it was time to stop procrastinating and go shopping for Easter outfits.

It shouldn’t have been such a task, but it seemed very overwhelming.  The boys don’t like fussy dress clothes, and I am just not in the mood to buy new clothes for myself, so the only person really excited about the shopping adventure was Addie.  So, she and I set off to see what we could find.

Addie is in an interesting stage: not quite a “tween”, but definitely not such a little girl anymore.  I mean, I guess she’ll always be our “little girl”, right?  But you know what I mean; she is starting to have an opinion (and sometimes an attitude) about what she wears, the activities in which she participates, the music she wants to hear.  This previously subtle change was a bit more obvious today.

She immediately found a pair of sandals that she fell in love with and begged me to buy; being in Ohio, I know better than to expect the weather to be nice from here on out after just one weekend of nice weather. I told her that we were going to hold off on sandals for now, but that maybe we could get them when it’s closer to summer.  Plus, she couldn’t wear those sandals for Easter, and that was the reason for shopping today.

Cue the whining.  And the bargaining.

“I’ll make a deal with you!” she offered, which meant that she was ready to agree to do chores that she would never complete, in order to get the shoes today.

“Not a chance,” was my response, as I sifted through racks of clothes.  She persisted, I continued to refuse, and ended up threatening to forego the new Easter dress if she didn’t drop it.  Bingo.  She really wanted a new dress, I guess.

She found four different dresses that she liked, tried them on, and selected the dress that twirled the best.  I tried on several different things, got frustrated because they all looked ridiculous, and put everything back.  I did find shirts for the boys, which aren’t very dressy but are at least a springy shade of blue.  We’ll call it a satisfactory shopping trip.

Although we had a rough beginning, my pretween did at least thank me as we left the mall, both for bringing her along and for buying her a new dress.  I definitely call that a success.  I know in the years to come, we’ll continue to butt heads, but if she can still say “thank you” at the end of the day (without prompting!), then I will be willing to look past the pretween/tween/teenage/beyond attitudes.

Now, if only I could convince Andrew to drop his little five year old attitude.  That one will take some work.