Who knew silly string could be so fun?

After seeing many colorful cans of the stuff at the craft store last week, Addie asked if we could get them for her birthday sleepover. My initial reaction was the same I always give when the kids want me to buy silly string: “No way.” But, after a second thought, I reconsidered and starting throwing cans of it into our cart; you only turn eight once in your life, after all! Addie’s eyes lit up as she realized that I changed my mind, and she happily started helping.

The girls at Addie’s party had an absolute blast with it. It was too much fun to watch them running around in the backyard, spraying each other with the colorful strands of gooey mess, and listening to them shriek in delight. It was a great addition to her birthday celebration.

Today, we found ourselves back at the craft store for another errand, and we discovered that the silly string is now on sale, 60% off! What else could I do but load up with 10 cans of the stuff (two for each of us in the family), and then after a split moment’s pause, I threw in four more cans to deliver to my niece and nephew (as we would see them later in the day).

Once everyone was home for the evening, we launched the most epic silly string battle in our little family’s history. We had a ball, chasing each other down in the yard and taking aim, then covering everyone head to toe in the neon strings. We made a huge mess, but it was totally worth it. I’m hoping this is one of those special memories that the kids will hang onto as school begins and thoughts of summer drift away. 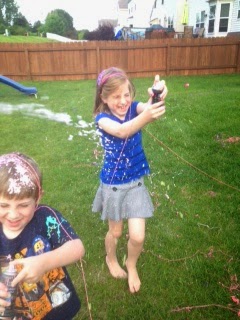 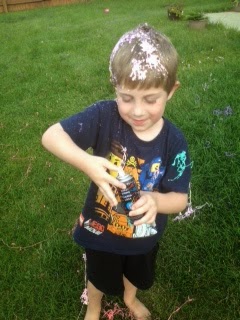 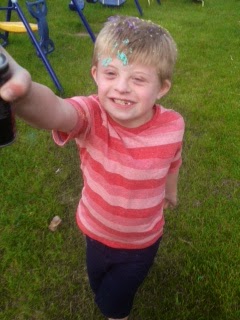