As many parents do on an autumn Saturday morning, I headed to the soccer field to watch my youngest son compete in a match. It was early, chilly, and clear from the very beginning of the game that the competition was tough. Not having extensive knowledge of the game, I typically try to restrict my sideline banter to “Go Knights,” or “Way to hustle,” or sometimes even “Good job, keeper!”

This game was no different for me, although other parents (from both teams) had plenty to say. Several parents thought that the ref wasn’t fairly calling the game, and that seemed to lead to an escalation in sideline tensions. I eventually stood up, forgoing my uncomfortable perch on a flimsy foldable chair in favor of pacing a bit as we watched the boys run up and down the field.

At one point, a boy from each team collided, but the play continued as the ref apparently just didn’t realize that there were possible injuries. The sideline erupted with frustrated calls from parents. I hate seeing kids get hurt during games, so I was focused on the field, willing each player to get up and hoping they weren’t seriously injured.

Then, the lady next to me called out, perhaps to the ref “How do you just keep running past them? That is so retarded!”

The tension of the game got to me, and I immediately snapped “Hey! That word is not ok!”

She and the woman sitting next to her looked at me, surprised. I was immediately disappointed in my approach, as my words had come off with an edge that I had not intended. But, in the heat of that moment, it was definitely there. I tried again: “Look, I know you’re upset, but that is not an appropriate word to use.”

The lady sitting next to her came to her defense: “She didn’t mean it that way. She doesn’t know.”

I attempted a smile. “Ok, well, now we know. It’s inappropriate. I’m a parent of a child with a disability, and it’s not ok to say that.”

The lady shot back, “NO, you’re just perceiving it the wrong way.”

At that point, I stopped. I could have gone on, but I knew that I was just really angry and anything else I would say would make the matter worse. I was seething, though. Yeah, calling her out like that was perhaps not the best approach, but turning it around and trying to make it my problem? Like she had a good reason for using that word that I was just not willing to consider? No. Not cool. She remained fairly quiet through the rest of the match, but at the end of the game (after a full-on parent sideline meltdown, from parents of both teams, which I didn’t participate in and was disheartened by), she turned to the parents on our team and loudly declared “All y’all’s just rude.”

That’s the thing with advocacy: it can come off in a rude manner, especially if you find yourself on the other end of it. It can be uncomfortable, and it’s not always easy. However, the need for a change generally doesn’t come from a place of comfort. While I didn’t deliver my message as eloquently as I would like, I still got the word out, loud and clear. Hopefully they truly heard me, and maybe they went home and realized my intentions. We all need to do the hard work to create a kinder, more inclusive place for our kids, and for each other.

Here’s hoping that the next soccer match isn’t quite as eventful. 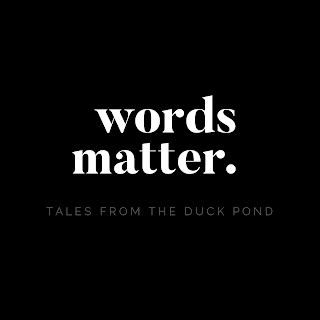 I Am Aware: Thoughts on Down Syndrome Awareness Month
Duck, Duck, New Site!