Yesterday and through last night, we had the biggest winter storm we’ve had around here in several years. Nothing remarkable, I suppose, but when it hasn’t snowed much, even the four-ish inches of snow that fell seems to be a lot. Fortunately, our activities both last night and today were cancelled, leaving us the luxury of spending the day at home.

Doing chores, of course. It is still Saturday, after all.

I assigned the indoor chores to the kids, and I set out to tackle the snowy driveway. It was the perfect plan: I was getting out of cleaning up the kitchen mess, and I would get a break from the incessant sibling bickery that just would not stop this morning. I laced up my snow boots, pulled on my hat, adjusted my sunglasses, and grabbed the snow shovel. Although I was about to embark upon three things I don’t really like (cold, snow, and exerting myself), I was ready.

With the first shovel full of snow, I was reminded that before the snow fell, there was freezing rain. A nice, frozen layer of yuck was hiding behind the clean, fluffy snow. My awesome plan of escaping the inside of the house was beginning to seem a bit lackluster.

I persevered, though, reminding myself how many steps my Fitbit would surely record, and also wondered if I could plug “snow shoveling” into my Weight Watchers app for even more Activity Points. After about 30 minutes, I stopped to check my Fitbit, and almost burst into tears right there on the sidewalk when I couldn’t read the display. I thought the battery died and all my hard work was for naught. I rushed into the garage and tore off my glove to see if I could revive the Fitbit. Fortunately, between the bright sun, the glare of the snow, and my sunglasses, I just couldn’t see the numbers. Everything was there, as it should be. I heaved a sigh of relief and trudged back down the driveway.

All in all, I spent an hour and a half chipping away at ice and removing snow from the driveway. A person has a lot of time to think while executing such a laborious task, and I found myself thinking:

“Why in the hell do we still live in Ohio?!”

“I wonder how my form is. Are the neighbors judging my form?”

“How long does it take for snot-sicles to completely freeze and fall off?”

“I should have the kids out here doing this, but then they would just throw snow everywhere and someone would cry. Probably me.”

“I really should buy a snowblower. Then I could charge, like, $10 to clear a driveway. That thing would pay for itself in no time!!”

As stubborn as I am, I had to throw in the towel before all the snow was completely cleared. My arms were shaking, my nose was running, and I was sweating under my layers of fleece. I threw some salt down, said a quick prayer that my back wouldn’t go out, and hoped that the work I had done would be enough to get my car out of the driveway tomorrow (and back in, for that matter!).

Next time, unless I follow through on that snowblower plan, I should just pay a neighborhood kid to do the driveway. Then, my arms wouldn’t be all shaky and my back wouldn’t be screaming in pain. Now, I wonder if I can pay someone to take down the stinking Christmas tree…

Until the next snow fall (which I hear will be Monday, ugh!), I will call this a victory. I got a ton of steps and activity points (well, maybe not a “ton,” but a lot), I got some peace and quiet (sort of), and my kids did the dishes. Jen – 1, snowy driveway – 0. 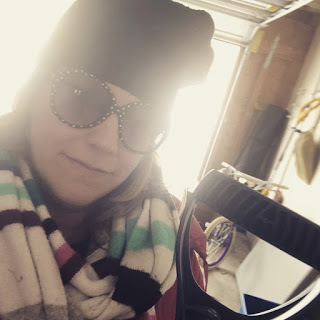 A few years ago, a dear friend challenged herself to blog every day. She did it, beautifully, and inspired me to do the same the following year. I don’t think I did it as well as she did, and while some of my posts probably shouldn’t be counted as an entry (I used the ol’ “I can’t think of anything to write but this totally still counts for today!” line more times than I should admit), I finished out 2014 with 365 new posts.

I didn’t just hit the blogging wall; I crashed into it and laid there, quietly (quiet in the blogosphere, anyway!) for most of the year. I don’t even think I was burned out, but I certainly wasn’t disciplined enough to keep up a steady writing pace. While I needed some time to reflect on my writing, I regret not blogging more than those four times. Three of those four were pretty decent; two were stories about Alex, and one was a snarky piece about booking a Disney vacation (and from that, I learned that you should never bad mouth that mouse, or anything relating to him, without falling under fast criticism of all his adoring fans…yeesh!).

Last week, I was moved to sit down and open up my blog. With the last day of school quickly approaching, I was inspired to write about my oldest son’s final days of elementary school. I pounded out a letter to my Alex; it didn’t take me long, but it was heartfelt and I meant every single word. At the suggestion of friends, I submitted it to a couple different online publications…and then I sat in fear that one of them would actually post it. I am a pretty sensitive person, for better or for worse, and I feared that it wouldn’t be well received if it was published outside of my little duck pond.

I was wrong to worry.

My piece was picked up, it’s been read and shared far and wide, and so far I’ve only heard positive feedback from it. If there are any naysayers, I’d rather not know. It was way outside of my comfort zone to share my writing, and hopefully I will be brave enough to do it again. I am more than grateful for the enthusiastic response, and for the way that piece has resonated with so many parents. At the very least, I hope this experience will inspire me to sit down and write more when the urge strikes, like I did last week. If nothing else, I hope to have more than four posts for 2016.

To those who encourage me, thank you. Keep doing it, please. I need all the help I can get.

Hmm. What do you know? Missed another one. I’m that tired (burned out, overwhelmed, whatever).

Even worse, I didn’t even notice it until now.
How many days left in the year?!?