Having a dog in a busy house doesn’t bring about dramatic change. It’s already loud and messy; what’s one more creature running around?

Until that extra creature starts peeing on the floor when the kids get on her nerves.  Poor Maisey; every time the kids love on her too much, we find a puddle. We had her checked out at the vet; at first we thought she had a UTI. Nope, it’s anxiety.
I just decided to have the upstairs carpets cleaned yesterday; it’s the only carpet in the house, and it needed help. After the cleaners left, I decided that the pup’s days of upstairs freedoms are over, at least until she furthers adjusts to the kids (or they calm down, whichever comes first). We found a baby gate in the basement, and thought Maisey would appreciate that she could lounge on the couch at night, rather than sleeping in her crate.
We went off to bed; shortly after, she started whining. That turned into crying, and eventually, barking. All. Night. Long. We also had both boys in our bed, courtesy of the windy weather. Awful. Mark and I got no sleep, at all. We are exhausted.
But, the carpet is still clean, so we’ll stick with it. Hopefully, tonight we’ll get more sleep! 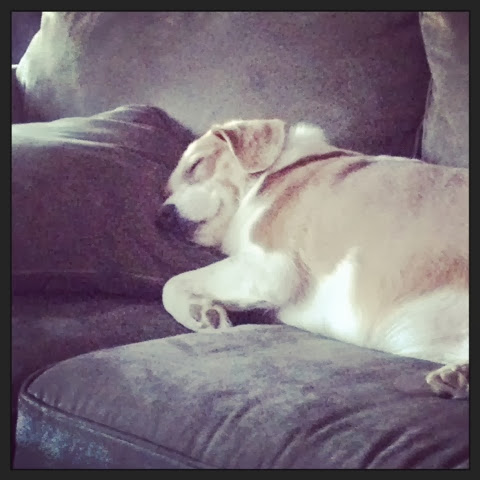