Selfie.  Such a strange weird, no?  Our culture has become obsessed with them.  It seems quite vain to post photos of ourselves, either alone or with friends, but we do it anyway.  It’s fun.  I’m guilty of doing it.  I mean, how else am I going to get feedback on a new haircut, or show off how artistic I can be with my iPhone camera as I sit out in the sun?

I watched last night as Ellen challenged the world to retweet the now famous Celebrity Selfie from the Oscars.  I played along; I mean, when Ellen says to do something, you just do it.  It was a silly, fun moment during an event that has been terribly dry in the past.  It kept us watching.  Now, what they should have done was have that photo printed, then had everyone in it sign their name, and they could have auctioned that thing off for a ton of money which could have then been donated to one of the charities supported by the people in that picture.  (You can tell that Team Alex will kick off in just 18 days…everything is a fundraising idea right now…)

For those of us who are always snapping the photos of our families and friends, selfies are important pieces of our own history.  Without them, there may be zero pictures of us.  I never think to ask someone to take a photo of me with my family; instead, I’m just taking a picture of them.  Now, though, it’s too easy to just turn the camera around, grab one of the kids, make a funny face, and boom…instant memory.

So, yes, selfies are fun, and it’s a trend in which I partake, but seriously, could we not come up with a better name for it?  I’m not even certain what would be better, but there has to be something.  I’ll keep thinking on that, but until that lightening bolt strikes, here’s a cute selfie that my Addie and I took just a while ago. 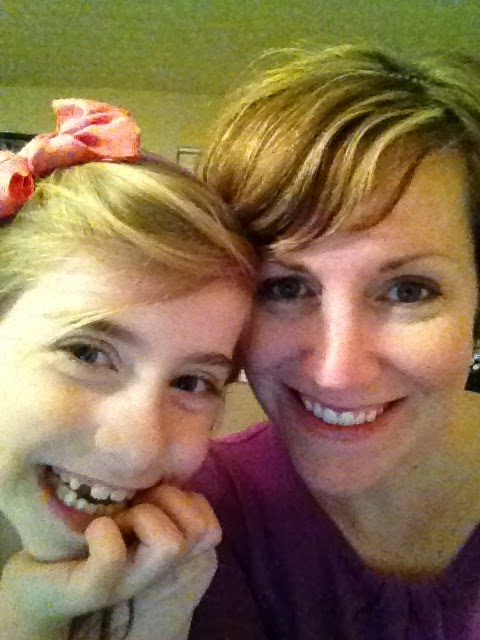