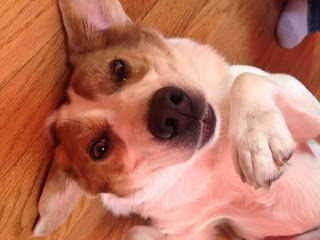 I am a cat person.  Always have been, and maybe always will be.  It took Mark’s terrible allergies to cats, and my daughter’s wish for a pet she could snuggle, to lead me to consider adding a dog to our family.
Back in September, we were out enjoying a Saturday as a family: lunch, errands, and an eventual stop at a local pet store to buy a fish.  It was time, we had just suddenly decided, to get a pet for the kids.  It would teach them responsibility, we thought, and certainly they would love having a little swimming pet!  The only downfall to that plan was, of course, all the other animals in that pet store.  Addie fell in absolute love with a snuggly kitten, but as we had already discussed, cats were out of the question because of Daddy’s allergies.  It didn’t stop her from loving on that cat, though, and the cat loved her right back.  After maybe 20 minutes of cuddles, I finally convinced her to put the cat down and look for a fish.  Alas, the next best thing to a cat caught her eye: a fluffy white puppy.  The sales person offered to let her play with the dog, and we agreed because Ad looked so hopeful and we had already dashed her dreams of owning a kitten.  Before the puppy was brought out to us, though, we explained to Addie that we would never buy a dog from a pet store because there are just so many dogs waiting to be rescued from shelters.  She seemed ok with that disclaimer, and happily played with the puppy.  Finally, after what felt like forever, we redirected the kids, once again, to the fish.  The poor fish seemed very lackluster after playing with such fluffy cuteness, but I suppose a fish was better than no pet at all, so soon we headed home with a new betta fish.  Bubbles would love its new home with us!  Right?  Sure.
Within an hour of having Bubbles in our house, Ad seemed very sullen.  She began explaining how a fish wasn’t a good pet for her because she couldn’t snuggle it.  A very valid point, indeed, but were we really ready for a dog?  A puppy, no less?  Addie assured us that she would help take care of a dog, and did such a nice job convincing us that we began looking at rescue websites.
The next morning, I noticed that a pet fair was to be held that afternoon, so Addie and I decided to check it out while the boys watched football.  I reminded her that the point of our outing was to familiarize ourselves with local rescue organizations, and not to bring home a dog. She cheerfully agreed; I think she may have already realized that we were heading down the road to adopting a dog.
We wandered about the pet fair, admiring dogs from a distance, until one in particular caught her eye.  Ad walked over to a cute beagle-looking pup, got down on her knees, and the pup came over and rested her head on Ad’s leg.  That was the moment that Ad fell in love with Maisey. 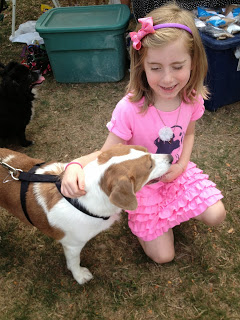 After speaking with the lovely volunteers from The Canine Collective (www.caninecollective.org), we snapped a quick picture to show the boys and then headed home.  Ad was convinced that Maisey was our dog, so after a brief discussion we decided to go ahead and submit an application.
Within days, our application was approved and I received a message asking when I wanted to pick Maisey up for our trial visit.  The kids were elated.  I was happy that they were so excited.  Mark was excited, too, as he has wanted a dog for a long time.  I was admittedly nervous, having never owned a dog before, but Maisey was just so sweet at the pet fair, and we would have the opportunity during the trial visit to make sure we would all be happy together.
It only took a few hours to realize that Maisey had found her forever home in our home.  The kids adored her from the beginning, and the pup just seemed to fit right into our chaotic little world. 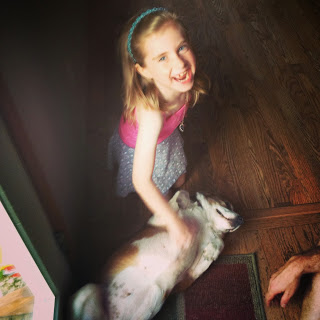 Who was happier?  Hard to say!

Later that week, we officially adopted Maisey, and although we’ve had our adjustments (both sides…for us, teaching the kids to be good pet parents, and for Maisey, learning that it’s not ok to eat people food…she does not appreciate her diet!), it’s been great.  For our kiddo with Down syndrome, Maisey is a fantastic motivator; for example, “Al, Maisey would really like to hear you read that book” works way better than “Al, you need to practice your reading”. This is a definite bonus!  Although the kids tend to love on her more than they probably should (this dog is not lacking for attention!), she is very patient and seems to be ok with being allowed to nap on the couch as a trade off.
As I’ve learned before (again, and again…and again!), sometimes life just doesn’t go as planned.  In this case, what started off as an adventure to choose a pet fish led to a journey of turning a cat person into something of a dog person.
Who knew?
Happy New Year!
Happy Birthday to Me!